Dev Environments enable you to collaborate easily by allowing you to share work-in-progress code with your team members. When using Dev Environments, you can easily set up repeatable development environments, keeping the environment details versioned along with your code. You can also share your work-in-progress code with your team members in just one click and without having to deal with any merge conflicts while moving between Git branches to get your code on to their machine.

Dev Environments also allow you to switch between your developer environments or your team members’ environments, move between branches to look at changes that are in progress, without moving off your current Git branch.

The Dev Environments feature is currently offered as a Preview. We recommend that you do not use this in production environments.

To get started with Dev Environments, you must have the following tools and extension installed on your machine:

Add Git to your PATH on Windows

If you have already installed Git, and it’s not detected properly, run the following command to check whether you can use Git with the CLI or PowerShell:

If it doesn’t detect Git as a valid command, you must reinstall Git and ensure you choose the option Git from the command line... or the Use Git and optional Unix tools... on the Adjusting your PATH environment step. 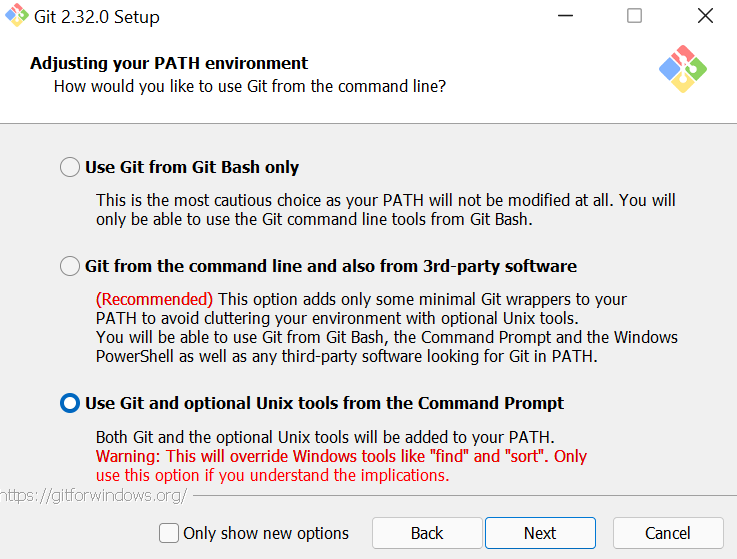 When cloning a Git repository using SSH, ensure you’ve added your SSH key to the ssh-agent. To do this, open a terminal and run ssh-add <path to your private ssh key>.

If you have enabled the WSL 2 integration in Docker Desktop for Windows, make sure you have an SSH agent running in your WSL 2 distribution.

How to start an SSH agent in WSL2
If your WSL 2 distribution doesn't have an `ssh-agent` running, you can append this script at the end of your profile file (that is: ~/.profile, ~/.zshrc, ...).

In the above example, the names wizardly_ellis and relaxed_maclaren are randomly generated. You’ll most likely see different names when you create your Dev Environment.

Hover over the container and click Open in VS Code to start working in VS Code as usual. You can also open a terminal in VS Code, and use Git to push or pull code to your repository, or switch between branches and work as you would normally.

You can launch the application by running the command make run in your VS Code terminal. This opens an http server on port 8080. Open http://localhost:8080 in your browser to see the running application.

Create a Dev Environment from a specific branch or tag

You can create a dev environment from a specific branch (for example, a branch corresponding to a Pull Request) or a tag by adding @mybranch or @tag as a suffix to your Git URL:

Docker then clones the repository with your specified branch or tag.

Let’s summarize the tasks we performed so far to start a single container Dev Environment.

This creates a Docker image of your dev environment, uploads it to the Docker Hub namespace you have specified in the previous step, and provides a tiny URL which you can use to share your work with your team members.

Your team members need to open the Create dialog, select the Existing Dev Environment tab, and then paste the URL. Your Dev Environment now starts in the exact same state as you shared it.

Using this shared Dev Environment, your team members can access the code, any dependencies, and the current Git branch you are working on. They can also review your changes and provide feedback even before you create a pull request!

You can also use Dev Environments to collaborate on any Docker Compose-based projects. For example, let’s use the compose-dev-env project from the Docker Samples GitHub repository.

When cloning a Git repository using SSH, ensure you’ve added your SSH key to the ssh-agent. To do this, open a terminal and run ssh-add <path to your private ssh key>.

Now your application is up and running, you can check by opening http://localhost:8080 in your browser.

The time taken to start the Compose application depends on how your application is configured, whether the images have been built, and the number of services you have defined, etc.

You’ll also notice that VS Code doesn’t open directly (unlike the single container Dev Environment) as there are multiple services configured. You can hover over a service and then click on the Open in VS Code button to open a specific service in Visual Studio Code. This stops the existing container and creates a new container which allows you to develop and update your service in VS Code.

You can now update your service and test it against your Compose application.

Set up your own Compose Dev Environment

In the previous section, we’ve learnt how to start a sample Compose Dev Environment. To set up a Dev Environment for your own Compose-based project, you’ll need some extra configuration that tells Docker Desktop how to build, start, and use the right Dev Environment image for your services.

Dev Environments use an additional docker-compose.yaml file located in the .docker directory at the root of your project. This file allows you to define the image required for a dedicated service, the ports you’d like to expose, along with additional configuration options dedicated to Dev Environments coming in the future.

Let’s take a detailed look at the docker-compose.yaml file we used in the compose-dev-env sample project.

In the above yaml file, the build context backend specifies that that the container should be built using the development stage (target attribute) of the Dockerfile located in the backend directory (context attribute)

The development stage of the Dockerfile is defined as follows:

The developmenttarget uses a golang:1.16-alpine image with all dependencies you need for development. You can start your project directly from VS Code and interact with the others applications or services such as the database or the frontend.

In our example, the Docker Compose files are the same. However, they could be different and the services defined in the main Compose file may use other targets to build or directly reference other images.

In this preview, Dev Environments support a JSON file which allows you to specify a Dockerfile to define your Dev Environment. You must include this as part of the .docker folder and then add it as a config.json file. For example:

Next, you have to define the dependencies you want to include in your Dockerfile.devenv, alongside the following requisites:

While some images or Dockerfiles will include a non-root user, many base images and Dockerfiles do not. Fortunately, you can add a non-root user named vscode. If you were to include the Docker tooling (e.g. docker cli, docker compose, etc.) in the Dockerfile.devenv, you would need the vscode user to be included in the docker group.

Specify a base image

If you already have an image built, you can specify it as a base image to define your Dev Environment. You must include this as part of the .docker folder and then add it as a config.json file. For example, to use the Jekyll base image, add:

This configuration is to unblock users for the Preview release only. We may move this configuration for single and multi-container applications to a Compose-based implementation in future releases.

To get involved with the discussion on how we are going to implement this as part of Compose, join the #docker-dev-environments channel in the Docker Community Slack, or let us know your feedback by creating an issue in the Dev Environments GitHub repository.

Start a Dev Environment from a local folder

You can also start a Dev Environment from local code on your machine.

The following section lists known issues and workarounds in the Dev Environments Preview:

We are excited that you are trying out our Dev Environments Preview. We would love to hear from you.

You can let us know your feedback by creating an issue in the Dev Environments GitHub repository. Alternatively, get in touch with us on the #docker-dev-environments channel in the Docker Community Slack.