Topics for all platforms

Make sure certificates are set up correctly

Docker Desktop ignores certificates listed under insecure registries, and does not send client certificates to them. Commands like docker run that attempt to pull from the registry produces error messages on the command line, like this:

As well as on the registry. For example:

Topics for Linux and Mac

If you are using mounted volumes and get runtime errors indicating an application file is not found, access to a volume mount is denied, or a service cannot start, such as when using Docker Compose, you might need to enable file sharing.

Volume mounting requires shared drives for projects that live outside of the /home/<user> directory. From Settings, select Resources and then File sharing. Share the drive that contains the Dockerfile and volume.

Docker Desktop fails to start on MacOS or Linux platforms

Following are the examples of errors on MacOS which indicate that the startup failure was due to exceeding the above mentioned OS limitation:

To check if your Mac supports the Hypervisor framework, run the following command in a terminal window.

If your Mac supports the Hypervisor Framework, the command prints kern.hv_support: 1.

If not, the command prints kern.hv_support: 0.

When sharing files from Windows, Docker Desktop sets permissions on shared volumes to a default value of 0777 (read, write, execute permissions for user and for group).

See also, Can I change permissions on shared volumes for container-specific deployment requirements? in the FAQs.

If you are using mounted volumes and get runtime errors indicating an application file is not found, access is denied to a volume mount, or a service cannot start, such as when using Docker Compose, you might need to enable shared folders.

With the Hyper-V backend, mounting files from Windows requires shared folders for Linux containers. From Settings, select Shared Folders and share the folder that contains the Dockerfile and volume.

Symlinks work within and across containers. To learn more, see How do symlinks work on Windows?.

Any file destined to run inside a container must use Unix style \n line endings. This includes files referenced at the command line for builds and in RUN commands in Docker files.

For an example of this issue and the resolution, see this issue on GitHub: Docker RUN fails to execute shell script.

On Linux, the system takes care of mounting a path to another path. For example, when you run the following command on Linux:

It adds a /work directory to the target container to mirror the specified path.

However, on Windows, you must update the source path. For example, if you are using the legacy Windows shell (cmd.exe), you can use the following command:

This starts the container and ensures the volume becomes usable. This is possible because Docker Desktop detects the Windows-style path and provides the appropriate conversion to mount the directory.

Docker Desktop also allows you to use Unix-style path to the appropriate format. For example:

Git Bash (or MSYS) provides a Unix-like environment on Windows. These tools apply their own preprocessing on the command line. For example, if you run the following command in Git Bash, it gives an error:

This is because the \ character has a special meaning in Git Bash. If you are using Git Bash, you must neutralize it using \\:

Also, in scripts, the pwd command is used to avoid hardcoding file system locations. Its output is a Unix-style path.

Combined with the $() syntax, the command below works on Linux, however, it fails on Git Bash.

You can work around this issue by using an extra /

Portability of the scripts is not affected as Linux treats multiple / as a single entry. Each occurence of paths on a single line must be neutralized.

In this example, The $(pwd) is not converted because of the preceding ‘/’. However, the second ‘/work’ is transformed by the POSIX layer before passing it to Docker Desktop. You can also work around this issue by using an extra /.

To verify whether the errors are generated from your script, or from another source, you can use an environment variable. For example:

It only expects the environment variable here. The value doesn’t matter.

In some cases, MSYS also transforms colons to semicolon. Similar conversions can also occur when using ~ because the POSIX layer translates it to a DOS path. MSYS_NO_PATHCONV also works in this case.

Your machine must have the following features for Docker Desktop to function correctly. 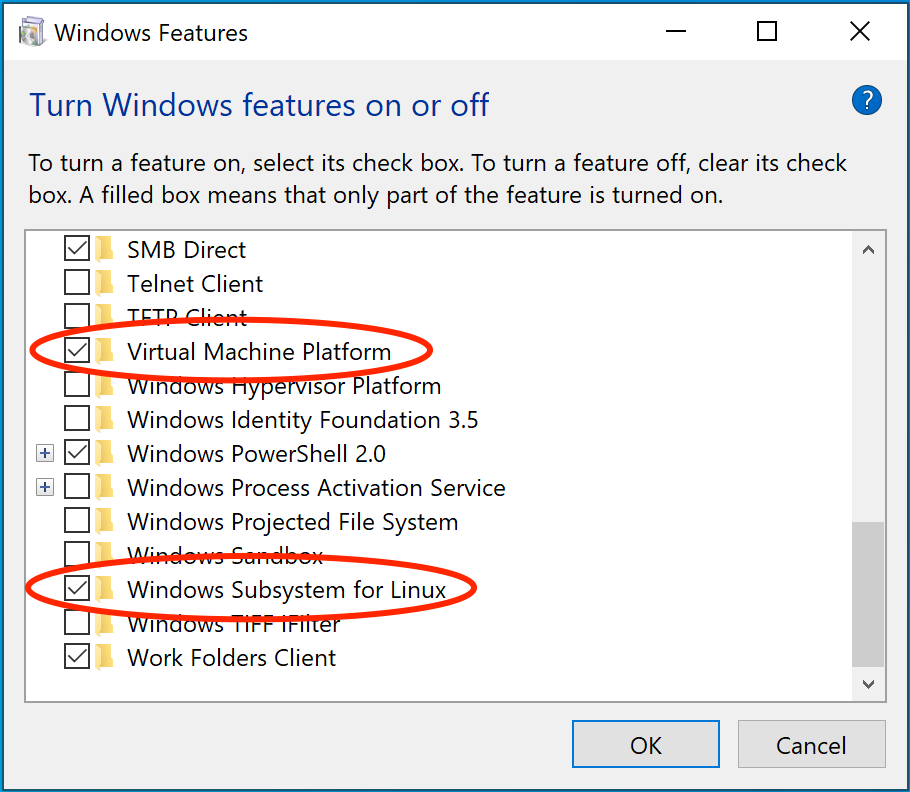 On Windows 10 Pro or Enterprise, you can also use Hyper-V with the following features enabled: 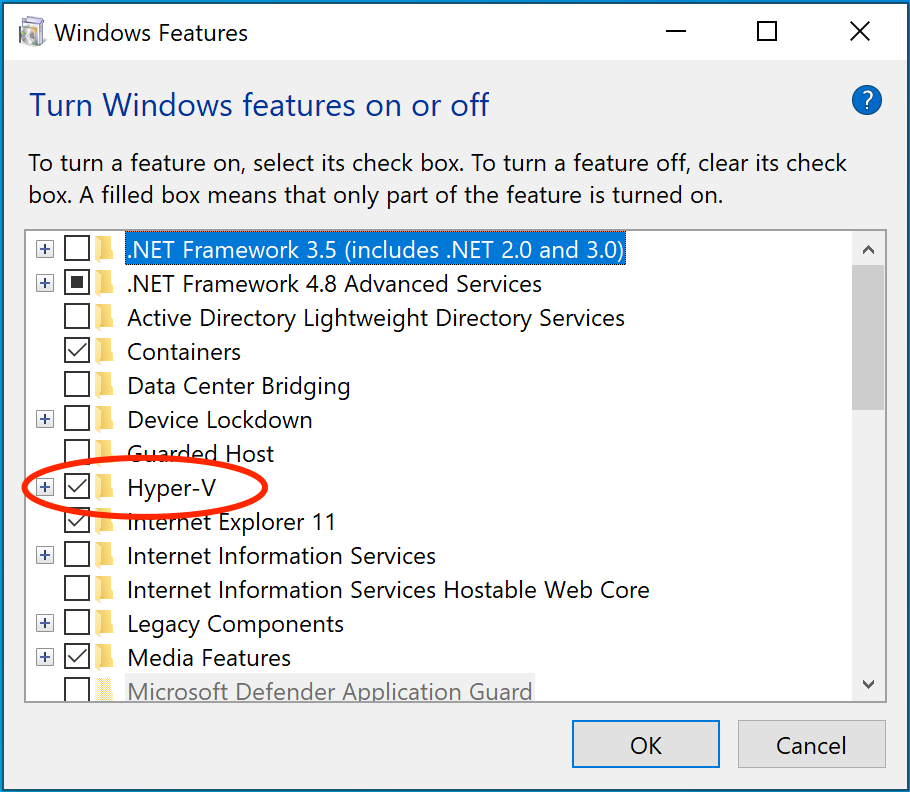 Docker Desktop requires Hyper-V as well as the Hyper-V Module for Windows Powershell to be installed and enabled. The Docker Desktop installer enables it for you.

Docker Desktop also needs two CPU hardware features to use Hyper-V: Virtualization and Second Level Address Translation (SLAT), which is also called Rapid Virtualization Indexing (RVI). On some systems, Virtualization must be enabled in the BIOS. The steps required are vendor-specific, but typically the BIOS option is called Virtualization Technology (VTx) or something similar. Run the command systeminfo to check all required Hyper-V features. See Pre-requisites for Hyper-V on Windows 10 for more details.

From the start menu, type Turn Windows features on or off and press enter. In the subsequent screen, verify that Hyper-V is enabled.

Virtualization must be enabled

In addition to Hyper-V or WSL 2, virtualization must be enabled. Check the Performance tab on the Task Manager: 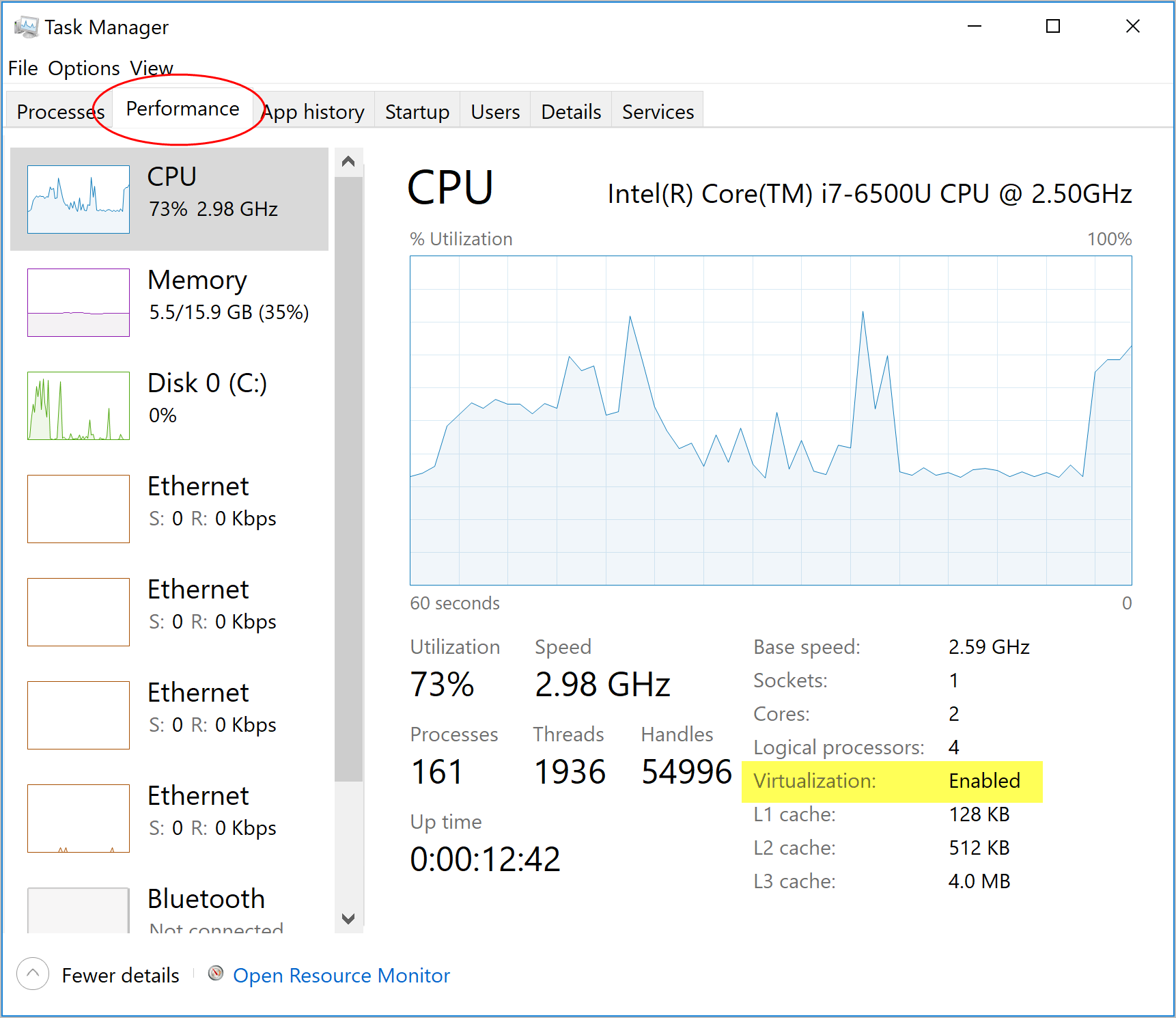 If you have completed the steps described above and are still experiencing Docker Desktop startup issues, this could be because the Hypervisor is installed, but not launched during Windows startup. Some tools (such as older versions of Virtual Box) and video game installers disable hypervisor on boot. To reenable it:

You can also refer to the Microsoft TechNet article on Code flow guard (CFG) settings.

Docker Desktop is not supported on Windows Server. If you have questions about how to run Windows containers on Windows 10, see Switch between Windows and Linux containers.

A full tutorial is available in docker/labs on Getting Started with Windows Containers.

You can install a native Windows binary which allows you to develop and run Windows containers without Docker Desktop. However, if you install Docker this way, you cannot develop or run Linux containers. If you try to run a Linux container on the native Docker daemon, an error occurs:

IPv6 is not (yet) supported on Docker Desktop.