Authorization plugins must follow the rules described in Docker Plugin API. Each plugin must reside within directories described under the Plugin discovery section.

The abbreviations AuthZ and AuthN mean authorization and authentication respectively.

You are responsible for registering your plugin as part of the Docker daemon startup. You can install multiple plugins and chain them together. This chain can be ordered. Each request to the daemon passes in order through the chain. Only when all the plugins grant access to the resource, is the access granted.

When an HTTP request is made to the Docker daemon through the CLI or via the Engine API, the authentication subsystem passes the request to the installed authentication plugin(s). The request contains the user (caller) and command context. The plugin is responsible for deciding whether to allow or deny the request.

The sequence diagrams below depict an allow and deny authorization flow: 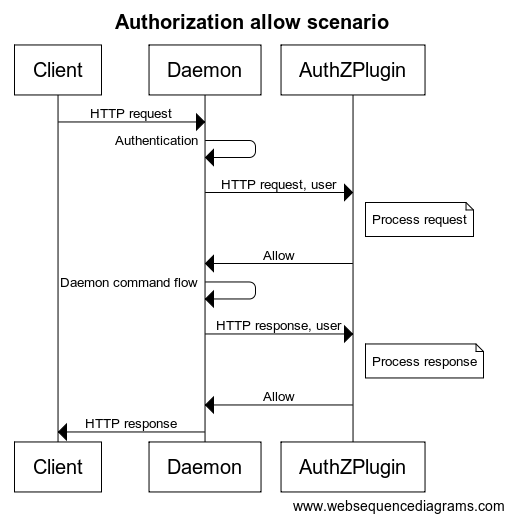 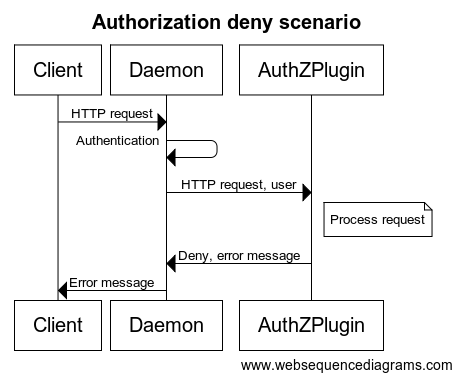 During request/response processing, some authorization flows might need to do additional queries to the Docker daemon. To complete such flows, plugins can call the daemon API similar to a regular user. To enable these additional queries, the plugin must provide the means for an administrator to configure proper authentication and security policies.

To enable and configure the authorization plugin, the plugin developer must support the Docker client interactions detailed in this section.

Enable the authorization plugin with a dedicated command line flag in the --authorization-plugin=PLUGIN_ID format. The flag supplies a PLUGIN_ID value. This value can be the plugin’s socket or a path to a specification file. Authorization plugins can be loaded without restarting the daemon. Refer to the dockerd documentation for more information.

In addition to Docker’s standard plugin registration method, each plugin should implement the following two methods:

Each plugin must support two request authorization messages formats, one from the daemon to the plugin and then from the plugin to the daemon. The tables below detail the content expected in each message.

The plugin must support two authorization messages formats, one from the daemon to the plugin and then from the plugin to the daemon. The tables below detail the content expected in each message.