The swarm mode public key infrastructure (PKI) system built into Docker makes it simple to securely deploy a container orchestration system. The nodes in a swarm use mutual Transport Layer Security (TLS) to authenticate, authorize, and encrypt the communications with other nodes in the swarm.

When you create a swarm by running docker swarm init, Docker designates itself as a manager node. By default, the manager node generates a new root Certificate Authority (CA) along with a key pair, which are used to secure communications with other nodes that join the swarm. If you prefer, you can specify your own externally-generated root CA, using the --external-ca flag of the docker swarm init command.

The manager node also generates two tokens to use when you join additional nodes to the swarm: one worker token and one manager token. Each token includes the digest of the root CA’s certificate and a randomly generated secret. When a node joins the swarm, the joining node uses the digest to validate the root CA certificate from the remote manager. The remote manager uses the secret to ensure the joining node is an approved node.

Each time a new node joins the swarm, the manager issues a certificate to the node. The certificate contains a randomly generated node ID to identify the node under the certificate common name (CN) and the role under the organizational unit (OU). The node ID serves as the cryptographically secure node identity for the lifetime of the node in the current swarm.

The diagram below illustrates how manager nodes and worker nodes encrypt communications using a minimum of TLS 1.2. 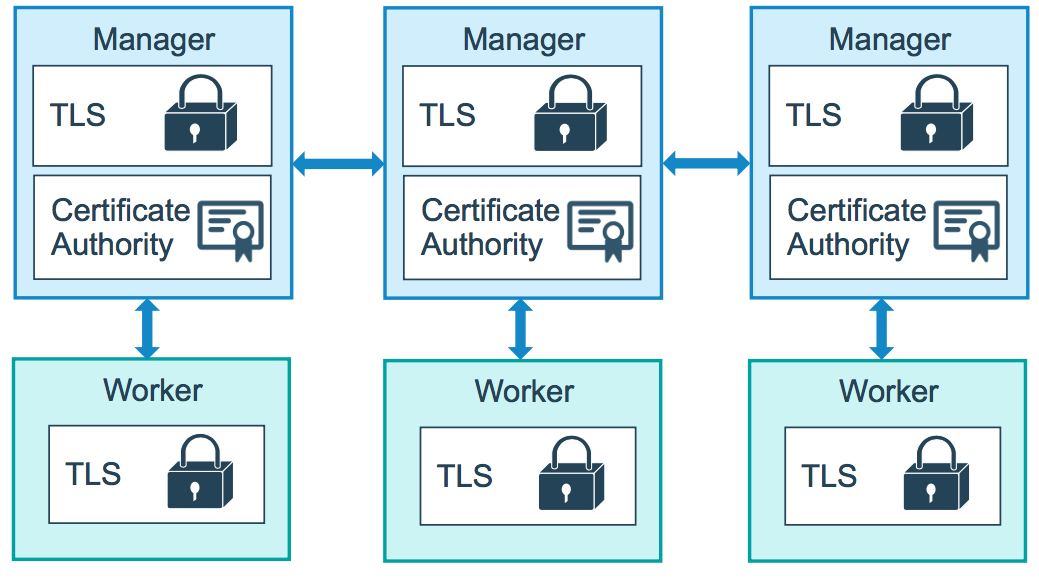 The example below shows the information from a certificate from a worker node:

Mirantis Kubernetes Engine (MKE), formerly known as Docker UCP, provides an external certificate manager service for the swarm. If you run swarm on MKE, you shouldn’t rotate the CA certificates manually. Instead, contact Mirantis support if you need to rotate a certificate.

In the event that a cluster CA key or a manager node is compromised, you can rotate the swarm root CA so that none of the nodes trust certificates signed by the old root CA anymore.

When you issue the docker swarm ca --rotate command, the following things happen in sequence:

From this point on, all new node certificates issued are signed with the new root CA, and do not contain any intermediates.