Configure CI/CD for your application

This page guides you through the process of setting up a GitHub Action CI/CD pipeline with Docker containers. Before setting up a new pipeline, we recommend that you take a look at Ben’s blog on CI/CD best practices.

This guide contains instructions on how to:

Before we begin, it must be said that Continuous Integration (CI) and Continuous Deployment (CD) each is a huge subject, with many different approaches and opinions. The approach chosen in this guide is optimised for pedagogical clarity and simplicity and is not meant to be the One True Way to test and release software.

Let’s get started. This guide uses a simple Go project as an example. In fact, it is the same project we got acquainted with in Build Images part of this guide. The olliefr/docker-gs-ping repository contains the full source code and the Dockerfile. You can either fork it or to follow along and set up one of your own Go projects in a fashion described in this section.

Thus, as long as you have a GitHub repo with a project and a Dockerfile, you can complete this part of the tutorial.

The Docker Hub is a hosted repository service provided by Docker for finding and sharing container images.

To set up the access to Docker Hub API:

Your GitHub repository Secrets section would look like the following.

Now it will be possible to refer to these two variables from our workflows. This will open up an opportunity to publish our image to Docker Hub.

Set up the CI workflow

In the previous section, we created a PAT and added it to GitHub to ensure we can access Docker Hub from any GitHub Actions workflow. But before setting out to build the images for releasing our software, let’s build a CI pipeline to run the tests first.

To set up the workflow:

First, we will name this workflow:

Then, we will choose when we run this workflow. In our example, we are going to do it for every push against the main branch of our project:

The workflow_dispatch is optional. It enables to run this workflow manually from the Actions tab.

Now, we need to specify what we actually want to happen within our workflow. A workflow run is made up of one or more jobs that can run sequentially or in parallel.

The first job we would like to set up is the one to build and run our tests. Let it be run on the latest Ubuntu instance:

A job is a sequence of steps. For this simple CI pipeline we would like to:

Building the binary in step 4 is actually optional. It is a “smoke test”. We don’t want to be building a Docker image and attempting functional testing if our application does not even compile. If we had “unit tests” or some other small tests, we would run them between steps 4 and 5 as well.

The following sequence of steps achieves the goals we just set.

As is usual with YAML files, be aware of indentation. The complete workflow file for reference is available in the project’s repo, under the name of .github/workflows/ci.yml.

This should be enough to test our approach to CI. Change the workflow file name from main.yml to ci.yml and press Start commit button. Fill out the commit details in your preferred style and press Commit new file. GitHub Actions are saved as YAML files in .github/workflows directory and GitHub web interface would do that for us.

Select Actions from the navigation bar for your repository. Since we’ve enabled workflow_dispatch option in our Action, GitHub will have started it already. If not, select “CI/CD to Docker Hub” action on the left, and then press Run workflow button on the right to start the workflow.

Should the run fail, you can click on the failing entry to see the logs and amend the workflow YAML file accordingly.

Set up the CD workflow

Now, let’s create a GitHub Actions workflow to build and store the image for our application in Docker Hub. We can achieve this by creating two Docker actions:

In this example, let us set the push flag to true as we also want to push. We’ll then add a tag to specify to always go to the latest version. Lastly, we’ll echo the image digest to see what was pushed.

Now, we can add the steps required. Start a blank new workflow, just as we did before. Let’s give it a file name of release.yml and amend the template body to match the following.

This workflow is similar to the CI workflow, with the following changes:

Let’s save this workflow and check the Actions page for the repository on GitHub. Unlike the CI workflow, this new workflow cannot be triggered manually - this is how we set it up. So, in order to test it, we have to tag some commit. Let’s tag the HEAD of the main branch:

This means our tag was successfully pushed to the main repo. If we switch to the GitHub UI, we would see that the workflow has already been triggered: 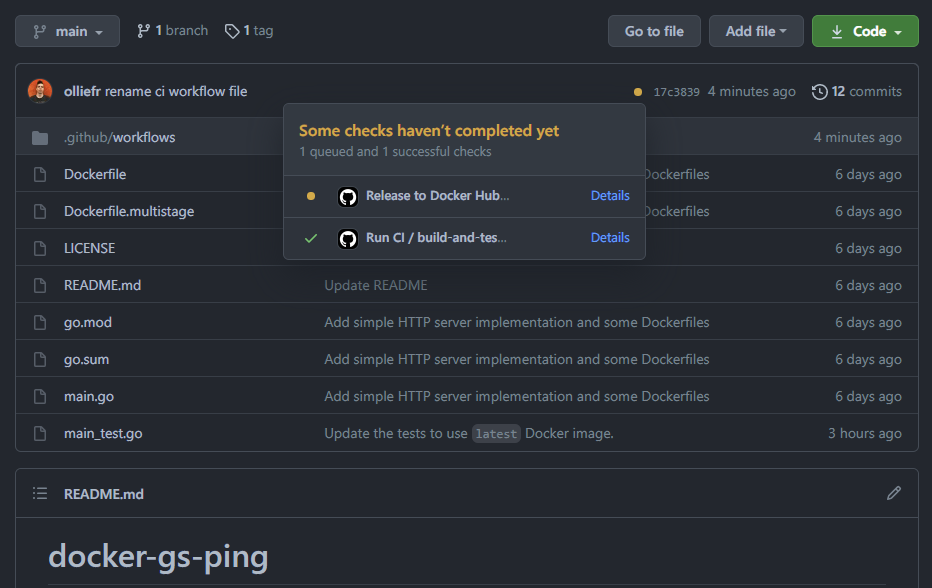 Plot twist! Despite having explained how to add secrets to the repository, we had forgotten to do it ourselves. And the workflow run results in error: 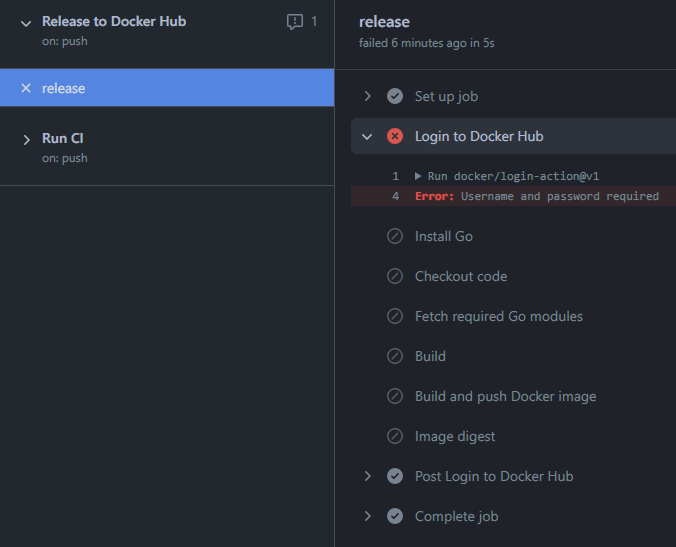 That’s easy to fix. We follow our own guide and add the secrets to the repository settings. But how do we re-run the workflow? We need to remove the tag and reapply it.

To remove the tag on the remote:

And to re-apply it locally and push:

And the workflow is triggered again. This time it completes without issues:

Since the image we’ve just pushed to Docker Hub is public, now it can be pulled by anyone, from anywhere:

We’ve just build a simple (maybe even naive) CI/CD workflow. There are many ways in which it can be improved. We’ll look at some of these ways in the next section.

Next, let’s look at how we can optimize the GitHub Actions workflow through build cache. This has two main advantages:

Let us set up a Builder with a build cache. First, we need to set up the builder, and then to configure the cache. In this example, let us add the path and keys to store this under using GitHub cache for this.

And lastly, after adding the builder and build cache snippets to the top of the Actions file, we need to add some extra attributes to the build and push step. This involves:

Now, run the CI workflow again and verify that it uses the build cache by checking the workflow log.

GitHub Actions are an immensely powerful way to automate your CI and CD pipelines, and there is a lot of documentation to aid you in that mission. It is not, however, the only way to integrate containers into your workflow. The aim of this section was to show you some of the basic things that are possible. There is a multitude of CI and CD tools on the market and you are very welcome to investigate what integration with the container ecosystem they provide. Well defined, automated CI pipelines can save you and your team a lot of effort.

In this module, you have learnt how to set up GitHub Actions workflow to an existing dockerized Go project, optimize your workflow to improve build times and reduce the number of pull requests, and finally, we learnt how to push only specific versions to Docker Hub.

You can also consider deploying your application to a public Cloud provider, such as Azure and AWS or to an orchestration platform such as Kubernetes.

In the next module, we’ll look into some options for doing so:

Help us improve this topic by providing your feedback. Let us know what you think by creating an issue in the Docker Docs GitHub repository. Alternatively, create a PR to suggest updates.