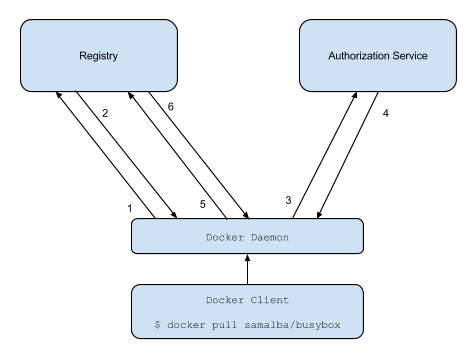 A service like this is used by the official Docker Registry to authenticate clients and verify their authorization to Docker image repositories.

As of Docker 1.6, the registry client within the Docker Engine has been updated to handle such an authorization workflow.

For example, say I (username jlhawn) am attempting to push an image to the repository samalba/my-app. For the registry to authorize this, I will need push access to the samalba/my-app repository. The registry will first return this response:

This format is documented in Section 3 of RFC 6750: The OAuth 2.0 Authorization Framework: Bearer Token Usage

This challenge indicates that the registry requires a token issued by the specified token server and that the request the client is attempting will need to include sufficient access entries in its claim set. To respond to this challenge, the client will need to make a GET request to the URL https://auth.docker.io/token using the service and scope values from the WWW-Authenticate header.

Defines getting a bearer and refresh token using the token endpoint.

service
The name of the service which hosts the resource.
offline_token
Whether to return a refresh token along with the bearer token. A refresh token is capable of getting additional bearer tokens for the same subject with different scopes. The refresh token does not have an expiration and should be considered completely opaque to the client.
client_id
String identifying the client. This client_id does not need to be registered with the authorization server but should be set to a meaningful value in order to allow auditing keys created by unregistered clients. Accepted syntax is defined in RFC6749 Appendix A.1.
scope
The resource in question, formatted as one of the space-delimited entries from the scope parameters from the WWW-Authenticate header shown above. This query parameter should be specified multiple times if there is more than one scope entry from the WWW-Authenticate header. The above example would be specified as: scope=repository:samalba/my-app:push. The scope field may be empty to request a refresh token without providing any resource permissions to the returned bearer token.

token
An opaque Bearer token that clients should supply to subsequent requests in the Authorization header.
access_token
For compatibility with OAuth 2.0, we will also accept token under the name access_token. At least one of these fields must be specified, but both may also appear (for compatibility with older clients). When both are specified, they should be equivalent; if they differ the client's choice is undefined.
expires_in
(Optional) The duration in seconds since the token was issued that it will remain valid. When omitted, this defaults to 60 seconds. For compatibility with older clients, a token should never be returned with less than 60 seconds to live.
issued_at
(Optional) The RFC3339-serialized UTC standard time at which a given token was issued. If issued_at is omitted, the expiration is from when the token exchange completed.
refresh_token
(Optional) Token which can be used to get additional access tokens for the same subject with different scopes. This token should be kept secure by the client and only sent to the authorization server which issues bearer tokens. This field will only be set when `offline_token=true` is provided in the request.

For this example, the client makes an HTTP GET request to the following URL:

Whether the token server requires authentication is up to the policy of that access control provider. Some requests may require authentication to determine access (such as pushing or pulling a private repository) while others may not (such as pulling from a public repository).

Once the token server has determined what access the client has to the resources requested in the scope parameter, it will take the intersection of the set of requested actions on each resource and the set of actions that the client has in fact been granted. If the client only has a subset of the requested access it must not be considered an error as it is not the responsibility of the token server to indicate authorization errors as part of this workflow.

It is this intersected set of access which is placed in the returned token.

The server then constructs an implementation-specific token with this intersected set of access, and returns it to the Docker client to use to authenticate to the audience service (within the indicated window of time):

Once the client has a token, it will try the registry request again with the token placed in the HTTP Authorization header like so:

This is also described in Section 2.1 of RFC 6750: The OAuth 2.0 Authorization Framework: Bearer Token Usage