Use the BTRFS storage driver

Btrfs is a next generation copy-on-write filesystem that supports many advanced storage technologies that make it a good fit for Docker. Btrfs is included in the mainline Linux kernel.

Docker’s btrfs storage driver leverages many Btrfs features for image and container management. Among these features are block-level operations, thin provisioning, copy-on-write snapshots, and ease of administration. You can easily combine multiple physical block devices into a single Btrfs filesystem.

This article refers to Docker’s Btrfs storage driver as btrfs and the overall Btrfs Filesystem as Btrfs.

Note: The btrfs storage driver is only supported on Docker Engine - Community on SLES, Ubuntu or Debian.

btrfs is supported if you meet the following prerequisites:

Configure Docker to use the btrfs storage driver

This procedure is essentially identical on SLES and Ubuntu.

One of the benefits of Btrfs is the ease of managing Btrfs filesystems without the need to unmount the filesystem or restart Docker.

When space gets low, Btrfs automatically expands the volume in chunks of roughly 1 GB.

To add a block device to a Btrfs volume, use the btrfs device add and btrfs filesystem balance commands.

Note: While you can do these operations with Docker running, performance suffers. It might be best to plan an outage window to balance the Btrfs filesystem.

How the btrfs storage driver works

The btrfs storage driver works differently from devicemapper or other storage drivers in that your entire /var/lib/docker/ directory is stored on a Btrfs volume.

Information about image layers and writable container layers is stored in /var/lib/docker/btrfs/subvolumes/. This subdirectory contains one directory per image or container layer, with the unified filesystem built from a layer plus all its parent layers. Subvolumes are natively copy-on-write and have space allocated to them on-demand from an underlying storage pool. They can also be nested and snapshotted. The diagram below shows 4 subvolumes. ‘Subvolume 2’ and ‘Subvolume 3’ are nested, whereas ‘Subvolume 4’ shows its own internal directory tree. 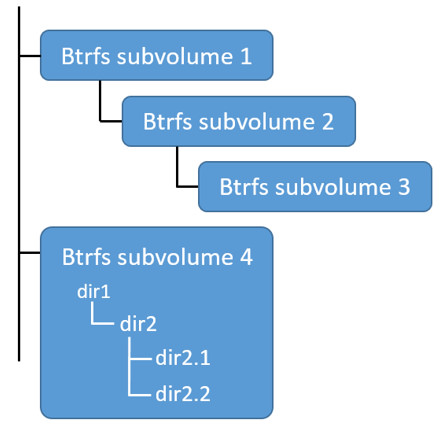 Only the base layer of an image is stored as a true subvolume. All the other layers are stored as snapshots, which only contain the differences introduced in that layer. You can create snapshots of snapshots as shown in the diagram below. 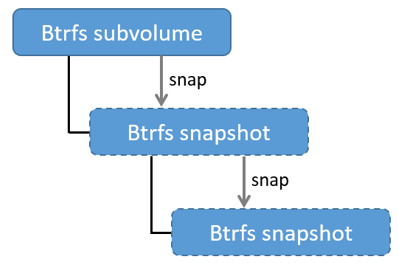 On disk, snapshots look and feel just like subvolumes, but in reality they are much smaller and more space-efficient. Copy-on-write is used to maximize storage efficiency and minimize layer size, and writes in the container’s writable layer are managed at the block level. The following image shows a subvolume and its snapshot sharing data. 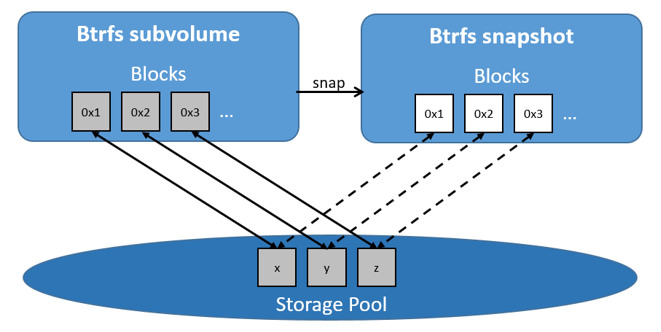 For maximum efficiency, when a container needs more space, it is allocated in chunks of roughly 1 GB in size.

Docker’s btrfs storage driver stores every image layer and container in its own Btrfs subvolume or snapshot. The base layer of an image is stored as a subvolume whereas child image layers and containers are stored as snapshots. This is shown in the diagram below. 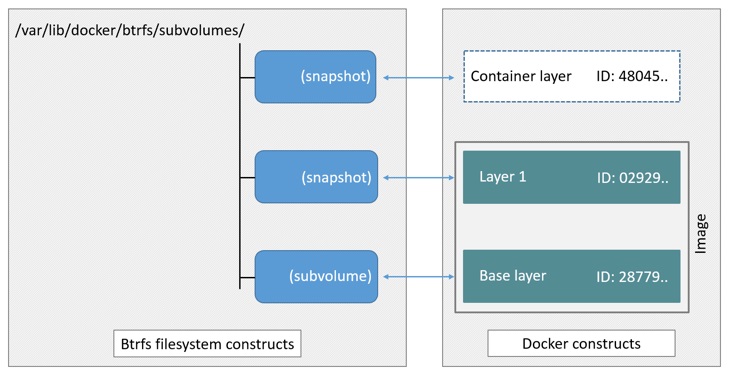 The high level process for creating images and containers on Docker hosts running the btrfs driver is as follows:

How container reads and writes work with btrfs

With Btrfs, writing and updating lots of small files can result in slow performance.

There are several factors that influence Docker’s performance under the btrfs storage driver.

Note: Many of these factors are mitigated by using Docker volumes for write-heavy workloads, rather than relying on storing data in the container’s writable layer. However, in the case of Btrfs, Docker volumes still suffer from these draw-backs unless /var/lib/docker/volumes/ is not backed by Btrfs.