Use the Device Mapper storage driver

For the systems where it is supported, devicemapper support is included in the Linux kernel. However, specific configuration is required to use it with Docker.

The devicemapper driver uses block devices dedicated to Docker and operates at the block level, rather than the file level. These devices can be extended by adding physical storage to your Docker host, and they perform better than using a filesystem at the operating system (OS) level.

Before following these procedures, you must first meet all the prerequisites.

This configuration is only appropriate for testing. The loop-lvm mode makes use of a ‘loopback’ mechanism that allows files on the local disk to be read from and written to as if they were an actual physical disk or block device. However, the addition of the loopback mechanism, and interaction with the OS filesystem layer, means that IO operations can be slow and resource-intensive. Use of loopback devices can also introduce race conditions. However, setting up loop-lvm mode can help identify basic issues (such as missing user space packages, kernel drivers, etc.) ahead of attempting the more complex set up required to enable direct-lvm mode. loop-lvm mode should therefore only be used to perform rudimentary testing prior to configuring direct-lvm.

Production hosts using the devicemapper storage driver must use direct-lvm mode. This mode uses block devices to create the thin pool. This is faster than using loopback devices, uses system resources more efficiently, and block devices can grow as needed. However, more setup is required than in loop-lvm mode.

After you have satisfied the prerequisites, follow the steps below to configure Docker to use the devicemapper storage driver in direct-lvm mode.

Warning: Changing the storage driver makes any containers you have already created inaccessible on the local system. Use docker save to save containers, and push existing images to Docker Hub or a private repository, so you do not need to recreate them later.

Edit the daemon.json file and set the appropriate options, then restart Docker for the changes to take effect. The following daemon.json configuration sets all of the options in the table above.

Restart Docker for the changes to take effect. Docker invokes the commands to configure the block device for you.

Warning: Changing these values after Docker has prepared the block device for you is not supported and causes an error.

The procedure below creates a logical volume configured as a thin pool to use as backing for the storage pool. It assumes that you have a spare block device at /dev/xvdf with enough free space to complete the task. The device identifier and volume sizes may be different in your environment and you should substitute your own values throughout the procedure. The procedure also assumes that the Docker daemon is in the stopped state.

Do not rely on LVM auto-extension alone. The volume group automatically extends, but the volume can still fill up. You can monitor free space on the volume using lvs or lvs -a. Consider using a monitoring tool at the OS level, such as Nagios.

To view the LVM logs, you can use journalctl:

If you run into repeated problems with thin pool, you can set the storage option dm.min_free_space to a value (representing a percentage) in /etc/docker/daemon.json. For instance, setting it to 10 ensures that operations fail with a warning when the free space is at or near 10%. See the storage driver options in the Engine daemon reference.

Increase capacity on a running device

You can increase the capacity of the pool on a running thin-pool device. This is useful if the data’s logical volume is full and the volume group is at full capacity. The specific procedure depends on whether you are using a loop-lvm thin pool or a direct-lvm thin pool.

The easiest way to resize a loop-lvm thin pool is to use the device_tool utility, but you can use operating system utilities instead.

A community-contributed script called device_tool.go is available in the moby/moby Github repository. You can use this tool to resize a loop-lvm thin pool, avoiding the long process above. This tool is not guaranteed to work, but you should only be using loop-lvm on non-production systems.

If you do not want to use device_tool, you can resize the thin pool manually instead.

If you do not want to use the device-tool utility, you can resize a loop-lvm thin pool manually using the following procedure.

If you are using loop-lvm mode, the output of docker info shows file paths for Data loop file and Metadata loop file:

Follow these steps to increase the size of the thin pool. In this example, the thin pool is 100 GB, and is increased to 200 GB.

To extend a direct-lvm thin pool, you need to first attach a new block device to the Docker host, and make note of the name assigned to it by the kernel. In this example, the new block device is /dev/xvdg.

Follow this procedure to extend a direct-lvm thin pool, substituting your block device and other parameters to suit your situation.

Activate the devicemapper after reboot

If you reboot the host and find that the docker service failed to start, look for the error, “Non existing device”. You need to re-activate the logical volumes with this command:

How the devicemapper storage driver works

Warning: Do not directly manipulate any files or directories within /var/lib/docker/. These files and directories are managed by Docker.

Use the lsblk command to see the devices and their pools, from the operating system’s point of view:

Use the mount command to see the mount-point Docker is using:

When you use devicemapper, Docker stores image and layer contents in the thinpool, and exposes them to containers by mounting them under subdirectories of /var/lib/docker/devicemapper/.

The /var/lib/docker/devicemapper/metadata/ directory contains metadata about the Devicemapper configuration itself and about each image and container layer that exist. The devicemapper storage driver uses snapshots, and this metadata include information about those snapshots. These files are in JSON format.

The devicemapper storage driver uses dedicated block devices rather than formatted filesystems, and operates on files at the block level for maximum performance during copy-on-write (CoW) operations.

Another feature of devicemapper is its use of snapshots (also sometimes called thin devices or virtual devices), which store the differences introduced in each layer as very small, lightweight thin pools. Snapshots provide many benefits:

When you start Docker with the devicemapper storage driver, all objects related to image and container layers are stored in /var/lib/docker/devicemapper/, which is backed by one or more block-level devices, either loopback devices (testing only) or physical disks. 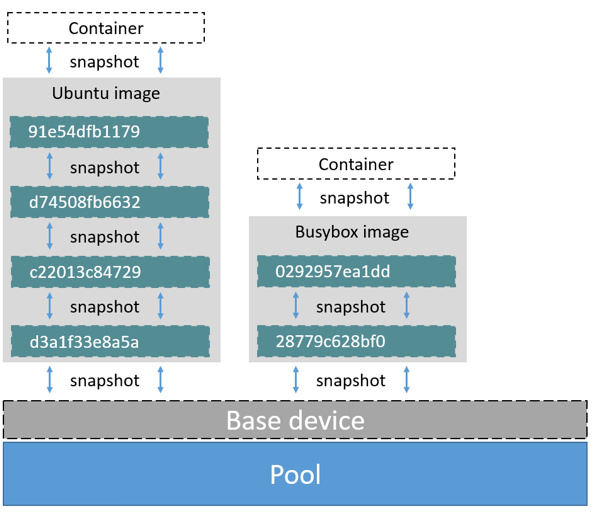 How container reads and writes work with devicemapper

With devicemapper, reads happen at the block level. The diagram below shows the high level process for reading a single block (0x44f) in an example container. 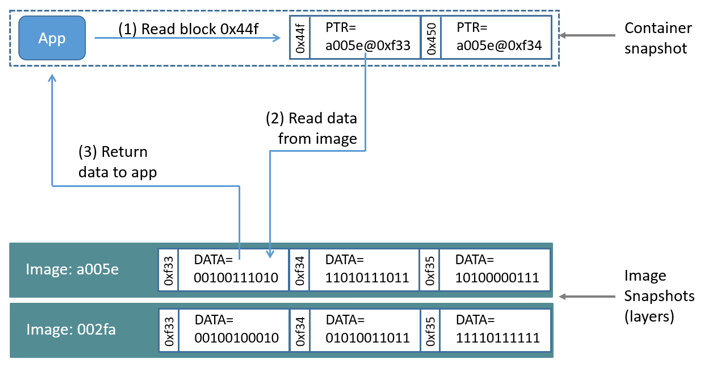 An application makes a read request for block 0x44f in the container. Because the container is a thin snapshot of an image, it doesn’t have the block, but it has a pointer to the block on the nearest parent image where it does exist, and it reads the block from there. The block now exists in the container’s memory.

Writing a new file: With the devicemapper driver, writing new data to a container is accomplished by an allocate-on-demand operation. Each block of the new file is allocated in the container’s writable layer and the block is written there.

Updating an existing file: The relevant block of the file is read from the nearest layer where it exists. When the container writes the file, only the modified blocks are written to the container’s writable layer.

Writing and then deleting a file: If a container writes to a file and later deletes the file, all of those operations happen in the container’s writable layer. In that case, if you are using direct-lvm, the blocks are freed. If you use loop-lvm, the blocks may not be freed. This is another reason not to use loop-lvm in production.

Keep these things in mind to maximize performance when using the devicemapper storage driver.