Use the ZFS storage driver

ZFS is a next generation filesystem that supports many advanced storage technologies such as volume management, snapshots, checksumming, compression and deduplication, replication and more.

It was created by Sun Microsystems (now Oracle Corporation) and is open sourced under the CDDL license. Due to licensing incompatibilities between the CDDL and GPL, ZFS cannot be shipped as part of the mainline Linux kernel. However, the ZFS On Linux (ZoL) project provides an out-of-tree kernel module and userspace tools which can be installed separately.

The ZFS on Linux (ZoL) port is healthy and maturing. However, at this point in time it is not recommended to use the zfs Docker storage driver for production use unless you have substantial experience with ZFS on Linux.

Note: There is also a FUSE implementation of ZFS on the Linux platform. This is not recommended. The native ZFS driver (ZoL) is more tested, more performant, and is more widely used. The remainder of this document refers to the native ZoL port.

There is no need to use MountFlags=slave because dockerd and containerd are in different mount namespaces.

Increase capacity on a running device

To increase the size of the zpool, you need to add a dedicated block device to the Docker host, and then add it to the zpool using the zpool add command:

If you want to implement a quota on a per-image/dataset basis, you can set the size storage option to limit the amount of space a single container can use for its writable layer.

Edit /etc/docker/daemon.json and add the following:

Save and close the file, and restart Docker.

How the zfs storage driver works

The process of creating a clone:

Filesystems, snapshots, and clones all allocate space from the underlying zpool.

The diagram below shows how this is put together with a running container based on a two-layer image. 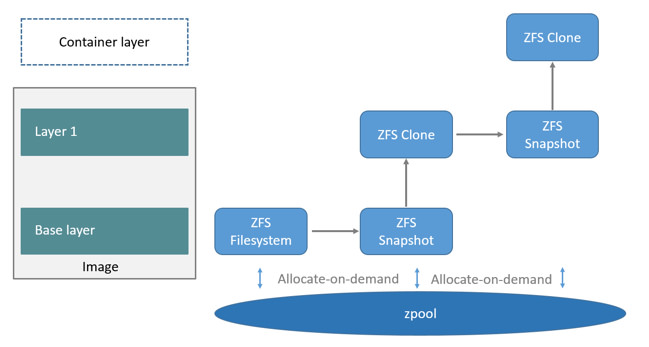 When you start a container, the following steps happen in order:

How container reads and writes work with zfs

Each container’s writable layer is a ZFS clone which shares all its data with the dataset it was created from (the snapshots of its parent layers). Read operations are fast, even if the data being read is from a deep layer. This diagram illustrates how block sharing works: 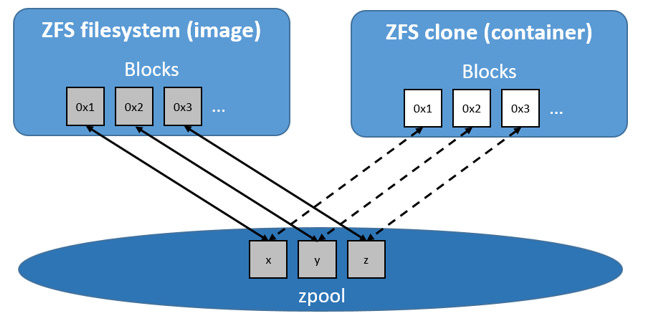 Writing a new file: space is allocated on demand from the underlying zpool and the blocks are written directly into the container’s writable layer.

Modifying an existing file: space is allocated only for the changed blocks, and those blocks are written into the container’s writable layer using a copy-on-write (CoW) strategy. This minimizes the size of the layer and increases write performance.

Deleting a file or directory:

There are several factors that influence the performance of Docker using the zfs storage driver.