Plan for Swarm in production

There are many aspects to securing a Docker Swarm cluster. This section covers:

These topics are not exhaustive. They form part of a wider security architecture that includes: security patching, strong password policies, role based access control, technologies such as SELinux and AppArmor, strict auditing, and more.

All nodes in a swarm cluster must bind their Docker Engine daemons to a network port. This brings with it all of the usual network related security implications such as man-in-the-middle attacks. These risks are compounded when the network in question is untrusted such as the internet. To mitigate these risks, Swarm and the Engine support Transport Layer Security (TLS) for authentication.

The Engine daemons, including the swarm manager, that are configured to use TLS only accepts commands from Docker Engine clients that sign their communications. Engine and Swarm support external 3rd party Certificate Authorities (CA) as well as internal corporate CAs.

The default Engine and Swarm ports for TLS are:

For more information on configuring Swarm for TLS, see the Overview Docker Swarm with TLS page.

Production networks are complex, and usually locked down so that only allowed traffic can flow on the network. The list below shows the network ports and protocols that the different components of a Swam cluster listen on. You should use these to configure your firewalls and other network access control lists.

The ports listed above are just for swarm cluster operations such as cluster creation, cluster management, and scheduling of containers against the cluster. You may need to open additional network ports for application-related communications.

It is possible for different components of a swarm cluster to exist on separate networks. For example, many organizations operate separate management and production networks. Some Docker Engine clients may exist on a management network, while swarm managers, discovery service instances, and nodes might exist on one or more production networks. To offset against network failures, you can deploy swarm managers, discovery services, and nodes across multiple production networks. In all of these cases you can use the list of ports above to assist the work of your network infrastructure teams to efficiently and securely configure your network.

All production environments should be highly available, meaning they are continuously operational over long periods of time. To achieve high availability, an environment must survive failures of its individual component parts.

The following sections discuss some technologies and best practices that can enable you to build resilient, highly-available swarm clusters. You can then use these cluster to run your most demanding production applications and workloads.

When creating HA swarm managers, you should take care to distribute them over as many failure domains as possible. A failure domain is a network section that can be negatively affected if a critical device or service experiences problems. For example, if your cluster is running in the Ireland Region of Amazon Web Services (eu-west-1) and you configure three swarm managers (1 x primary, 2 x secondary), you should place one in each availability zone as shown below. 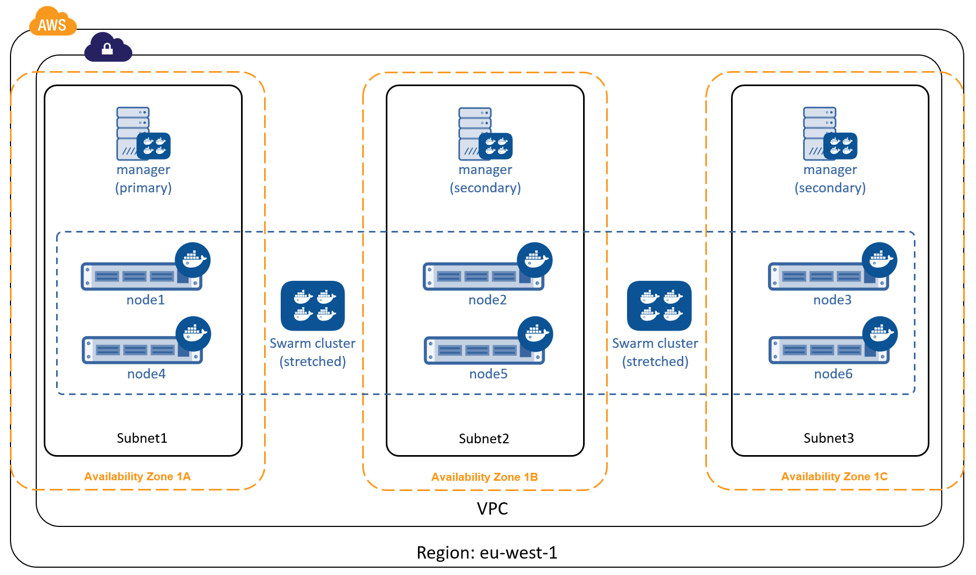 In this configuration, the swarm cluster can survive the loss of any two availability zones. For your applications to survive such failures, they must be architected across as many failure domains as well.

For swarm clusters serving high-demand, line-of-business applications, you should have 3 or more swarm managers. This configuration allows you to take one manager down for maintenance, suffer an unexpected failure, and still continue to manage and operate the cluster.

Consul, etcd, and Zookeeper are all suitable for production, and should be configured for high availability. You should use each service’s existing tools and best practices to configure these for HA.

For swarm clusters serving high-demand, line-of-business applications, it is recommended to have 5 or more discovery service instances. This due to the replication/HA technologies they use (such as Paxos/Raft) requiring a strong quorum. Having 5 instances allows you to take one down for maintenance, suffer an unexpected failure, and still maintain a strong quorum.

The diagram below shows a swarm cluster configured for HA. It has three swarm managers and three discovery service instances spread over three failure domains (availability zones). It also has swarm nodes balanced across all three failure domains. The loss of two availability zones in the configuration shown below does not cause the swarm cluster to go down. 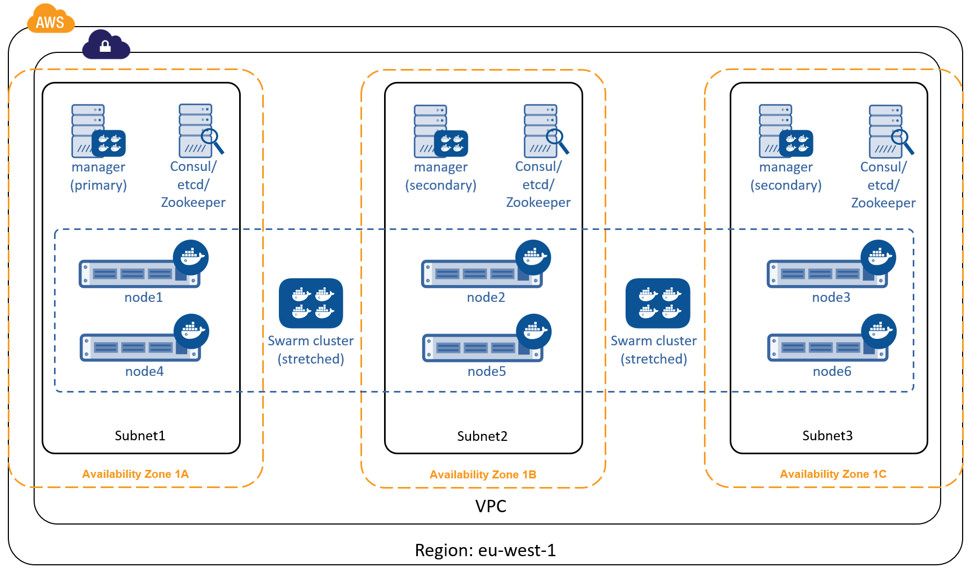 You can architect and build swarm clusters that stretch across multiple cloud providers, and even across public cloud and on premises infrastructures. The diagram below shows an example swarm cluster stretched across AWS and Azure. 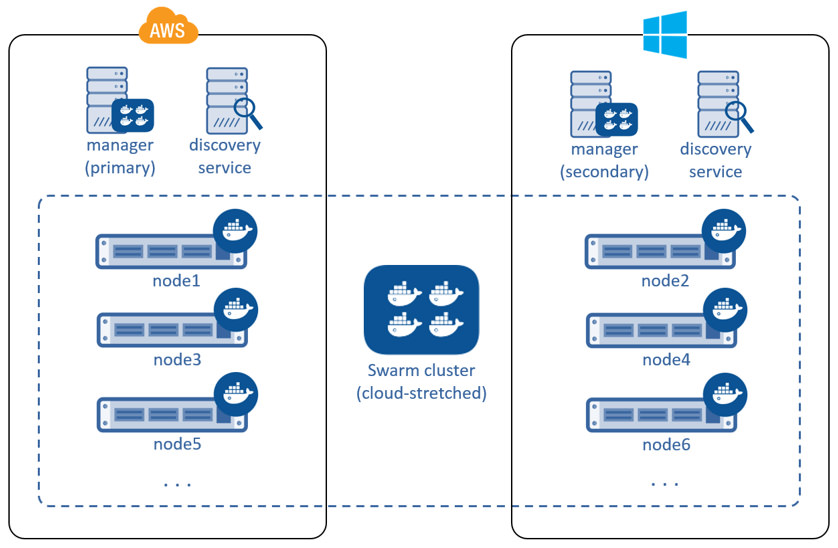 While such architectures may appear to provide the ultimate in availability, there are several factors to consider. Network latency can be problematic, as can partitioning. As such, you should seriously consider technologies that provide reliable, high speed, low latency connections into these cloud platforms – technologies such as AWS Direct Connect and Azure ExpressRoute.

If you are considering a production deployment across multiple infrastructures like this, make sure you have good test coverage over your entire system.

For example, many companies not only deploy dedicated isolated infrastructures for production – such as networks, storage, compute and other systems. They also deploy separate management systems and policies. This results in things like users having separate accounts for logging on to production systems etc. In these types of environments, it is mandatory to deploy dedicated production swarm clusters that operate on the production hardware infrastructure and follow thorough production management, monitoring, audit and other policies.

You should give careful consideration to the operating system that your Swarm infrastructure relies on. This consideration is vital for production environments.

It is not unusual for a company to use one operating system in development environments, and a different one in production. A common example of this is to use CentOS in development environments, but then to use Red Hat Enterprise Linux (RHEL) in production. This decision is often a balance between cost and support. CentOS Linux can be downloaded and used for free, but commercial support options are few and far between. Whereas RHEL has an associated support and license cost, but comes with world class commercial support from Red Hat.

When choosing the production operating system to use with your swarm clusters, choose one that closely matches what you have used in development and staging environments. Although containers abstract much of the underlying OS, some features have configuration requirements. For example, to use Docker container networking with Docker Engine 1.10 or higher, your host must have a Linux kernel that is version 3.10 or higher. Refer to the change logs to understand the requirements for a particular version of Docker Engine or Swarm.

You should also consider procedures and channels for deploying and potentially patching your production operating systems.

Performance is critical in environments that support business critical line of business applications. The following sections discuss some technologies and best practices that can help you build high performance swarm clusters.

Docker Engine container networks are overlay networks and can be created across multiple Engine hosts. For this reason, a container network requires a key-value (KV) store to maintain network configuration and state. This KV store can be shared in common with the one used by the swarm cluster discovery service. However, for best performance and fault isolation, you should deploy individual KV store instances for container networks and swarm discovery. This is especially so in demanding business critical production environments.

Scheduling strategies are how Swarm decides which nodes in a cluster to start containers on. Swarm supports the following strategies:

You can also write your own.

If your swarm nodes are balanced across multiple failure domains, the spread strategy evenly balance containers across those failure domains. However, spread on its own is not aware of the roles of any of those containers, so has no intelligence to spread multiple instances of the same service across failure domains. To achieve this you should use tags and constraints.

The binpack strategy runs as many containers as possible on a node, effectively filling it up, before scheduling containers on the next node.

This means that binpack does not use all cluster resources until the cluster fills up. As a result, applications running on swarm clusters that operate the binpack strategy might not perform as well as those that operate the spread strategy. However, binpack is a good choice for minimizing infrastructure requirements and cost. For example, imagine you have a 10-node cluster where each node has 16 CPUs and 128GB of RAM. However, your container workload across the entire cluster is only using the equivalent of 6 CPUs and 64GB RAM. The spread strategy would balance containers across all nodes in the cluster. However, the binpack strategy would fit all containers on a single node, potentially allowing you turn off the additional nodes and save on cost.

The question of ownership is vital in production environments. It is therefore vital that you consider and agree on all of the following when planning, documenting, and deploying your production swarm clusters.

The above is not a complete list, and the answers to the questions vary depending on how your organization’s and team’s are structured. Some companies are along way down the DevOps route, while others are not. Whatever situation your company is in, it is important that you factor all of the above into the planning, deployment, and ongoing management of your production swarm clusters.